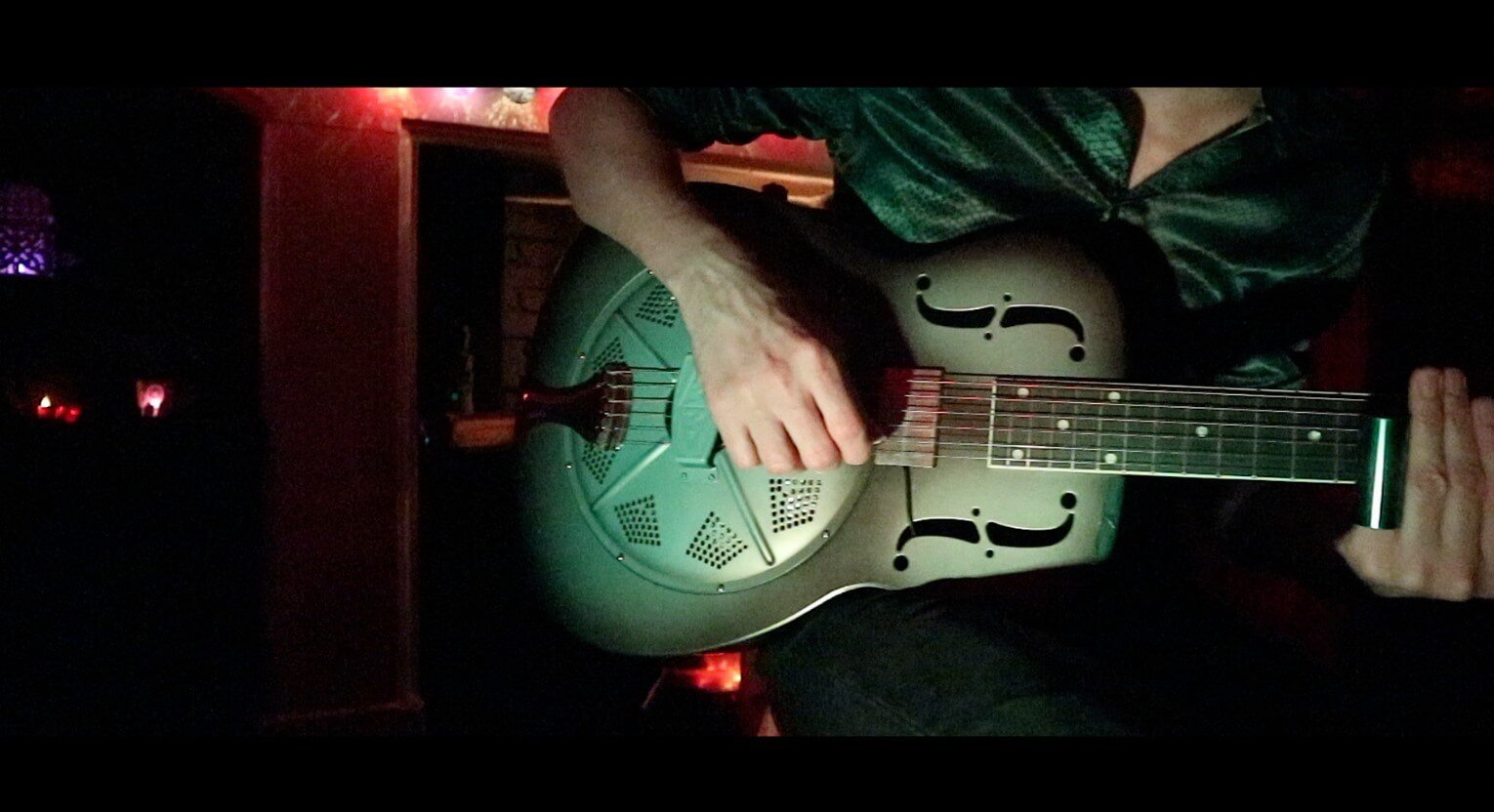 Hi everyone, this is Chris. I’d like to introduce you all to Vixen, my first resonator guitar.

I bought this gorgeous hunk of steel about two years ago. I’ve played guitar for many, many years but oddly I’d never even touched a resonator guitar before. I was finally inspired to get hold of one (this is a ‘Michael Messer Blues’ by the way, great guitars, check out his website HERE) by my love of the music of Chris Whitley.

To Joy (Revolution of the Innocent)

Chris (rest in peace) was an astonishing guitarist, vocalist and songwriter poet, visionary, angel, innovator whose artistic influence is very strong in our music and he was very often playing resonators.

Victoria and I have both been fans of Chris Whitley since his debut album in 1991 although we didn’t know we were both fans until we met in 2004. Victoria was introduced to Chris’s music through the inclusion of his song ‘Kick the Stones’ on the soundtrack of Thelma and Louise and I found him because my Dad bought Chris’s debut album Living With The Law and played it in the car a lot.

Now I know these kind of guitars are often synonymous with country and roots music, rural settings and wide open spaces etc…but I also hear them as very urban, the clanging metallic noises, sometimes shiny sometimes rusty, at once abrasive yet also capable of great tenderness. And as for the open spaces idea, I see those spaces above a cityscape. Chris Whitley was brilliant at both the rural, rootsy sound and the amped up electric screams of the city. Here’s a couple of examples of his music, first the title track from his debut album ‘Living With The Law’:

I’ve loved that song for such a long time! And here he is a few years later on his own in what looks like a burnt-out barn:

For me, both of those songs showcase his effortless blend of rural and urban, not one then the other, they both do it on their own.

Look What Love Has Done

My beautiful resonator Vixen is on every song on our recently released debut album ‘Painting With An Open Heart’ and for the purposes of this blog I’d like to draw your attention to track 6, ‘Angels and Anvils’.  This song is all about Chris Whitley, how we miss him, what a loss he was, what he could’ve done if he’d lived longer. And for fans of his music there are some references to his lyrics in ours. Here’s the song:

We were lucky enough to have Mat Sampson (who runs Bink Bonk Studios in Bristol) on bass and Andy Edwards (who has toured with Robert Plant) on drums helping us find our roots-rock feet on that. And you can see me in there happily bashing my resonator under the Hotwells fly-over in Bristol during a briefly sunny period in late-winter lockdown.

I hope Chris Whitley would’ve liked the song. Even if not I’m sure he’d have appreciated the sentiment.

In conclusion, Chris Whitley was a genius and I’m going to be playing resonators for the rest of my life!

P.S. All the subtitles in this blog are Chris Whitley song titles, I highly recommend that you check those out!

And you can watch other films of ours on our dedicated ‘Films’ page HERE.

By submitting my information, I agree to receive personalized updates and marketing messages about Hangover Square based on my information, interests, activities, website visits and device data and in accordance with the Privacy Policy. I understand that I can opt-out at any time by emailing [email protected]